"The City of Angels" and capital of Thailand

Holidaymakers visiting Thailand for the fist time are often are usually completely overwhelmed by Bangkok. It can indeed be intimidating: hot, humid, noisy and rather alien. But it is a modern capital city and full of life; The traffic is pretty chaotic; the noise is deafening and the crowds seem overwhelming, but just take it easy for a bit and relax and you will find the people friendly, helpful and welcoming. Most visitors will soon head to the beaches in the south or to the forests and mountains in the north, which is a shame because Bangkok is one of the world’s great cities.

Bangkok - the hub of Southeast Asia

As one of the most exciting cities in Asia, Bangkok is right at the top of the popularity list for adventure-hungry travellers; with its history, culture, shopping and entertainment Bangkok has something to offer just about any visitor. Almost every vacation in Thailand begins and ends here, so plan to spend some time here, you will not be sorry.

Coming down from the north, the mighty Chao Phraya River winds through the centre of Bangkok and, along with the networks of canals (called klongs in Thai), it is an excellent way to way to get your first impressions of this mega-city, and avoid the traffic. You have a choice of either the public express boat service, a very inexpensive way to get around, or hiring you own long-tail boat.

At regular intervals, but without a real timetable, express boats stop at the regular piers on both sides of the river and you can reach many of Bangkok’s most important sights, including Wat Arun and the Grand Palace. A long-tail boat trip on the canals make a fascinating day out and dinner cruise can round off a day on the water.

Bangkok is currently home to around 15 million people; the exact number is not really known. That is about a 40% increase since the Millennium.

Chaotic conditions on the most important roads are a part of everyday life for most of the day. An underground line (MRT) and the elevated railway lines (BTS) help, but do not solve the problem. A well-functioning city bus network transports millions of residents everywhere across the city every day, but is difficult for tourists to negotiate as many have their routes displayed only in Thai. You can, though, get information at few transport hubs, such a Victory Monument, and the line numbers, at least, are displayed in Arabic numerals.  The non-air-conditioned buses are very inexpensive and the air-conditioned ones are not too much more.

Discover Bangkok: some highlights and other tips

Theravada Buddhism is the dominant religion in all of Thailand and there are around 400 temples in the city of Bangkok alone. The most famous of these are among the most photographed buildings in the world. Among them, Wat Phra Kaeo, the Temple of the Emerald Buddha and the nearby Wat Pho, the Temple of the Reclining Buddha.

A great many of the most interesting sights are easily got to by taxi, for example the handicraft island, Koh Kret, in the Chao Phaya near Pak Kret and the interesting fresh market, Talad Thai, north of the city near Rangsit, east of Thammasat University Rangsit Campus. 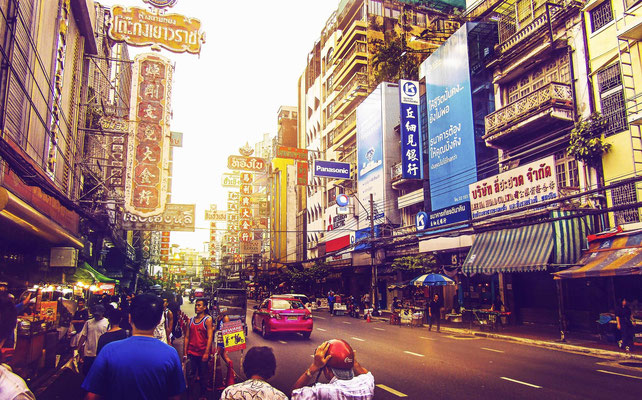 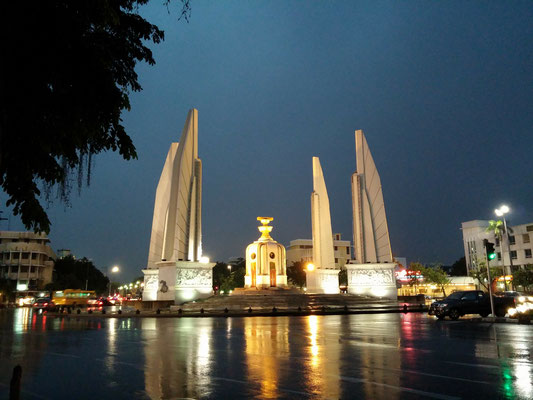 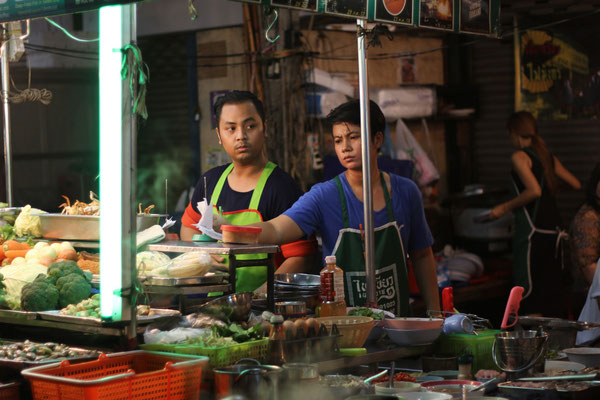 If you have the time, then the wholesale clothing market at Bobae, near the Prince Palace Hotel, and the amazing weekend flea market at Chatuchak are great places for shopping. As are the new shopping centers with their full quota of international brand names. Terminal 21 on Asoke, Emporium on Sukhumvit, MBK at Siam and Siam Paragon, also Siam are just a few of them.

The many museums in the heart of the city will delight culture lovers.

The areas between Nana and Asoke, which are close to Sukhumvit, are peppered with clubs, discos and bars on the eastern side, while the well-known "Soi Cowboy" and Asoke attract single travellers and adventurous couples.

Soi Thonglor offers more dignified drinking places and restaurants and the Hard Rock Cafe Bangkok can be found at Siam Square offering an evening live music and food and drinks until late at night. If you would like a good view of the city then you can go up to the viewing platform in Baiyoke Tower 2, the tallest building in Bangkok, or enjoy drinks and top-class dining at the State Tower (also called Lebua) on the river or the Banyan Tree Noble Hotel on Sathorn Road.

Getting around in Bangkok

Almost all of the major tourist hotels are located along the BTS routes; there are usually plenty of taxis and the fares are low by international standards. Do insist, though, on the driver using his metre, and give your destination to the driver in writing if possible; a business card of the hotel, shop, etc. will be fine. Your hotel reception will be able to help you with more specific information. Most taxi drivers are honest, but do change cabs if problems arise.

You need to be more wary of tuk-tuk drivers. They are well known for trying various scams that usually end up with you being taken shopping. But they are fun and are a good way to get around the traffic jams.  You must always agree on the fare before setting off. There are also motorcycle taxis at many road junctions, they are absolutely best way of all to get around the traffic but again agree the fare first and wear a helmet. Recommended for adrenaline junkies. 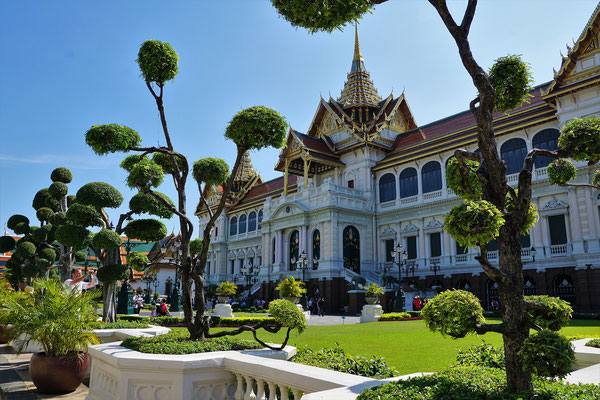 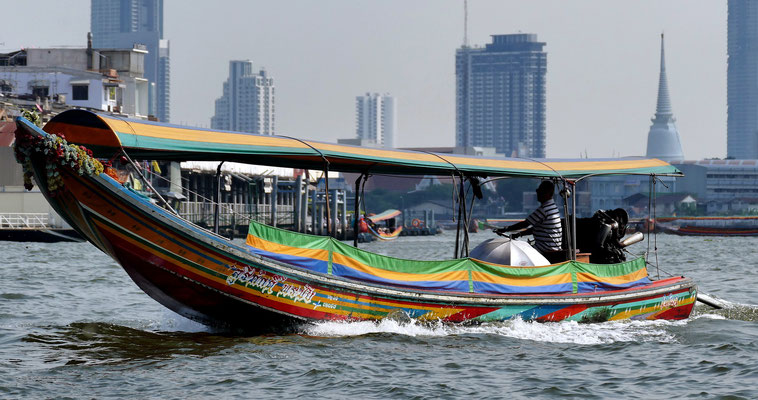 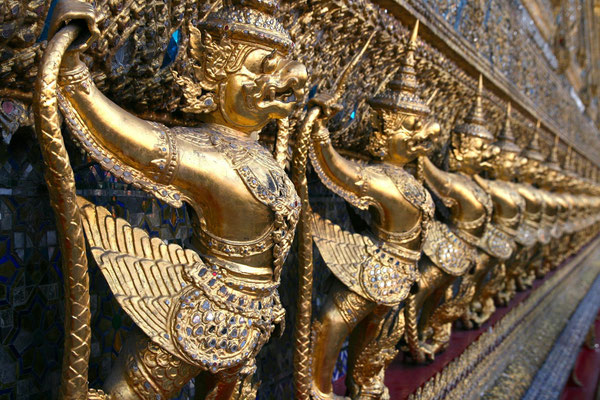 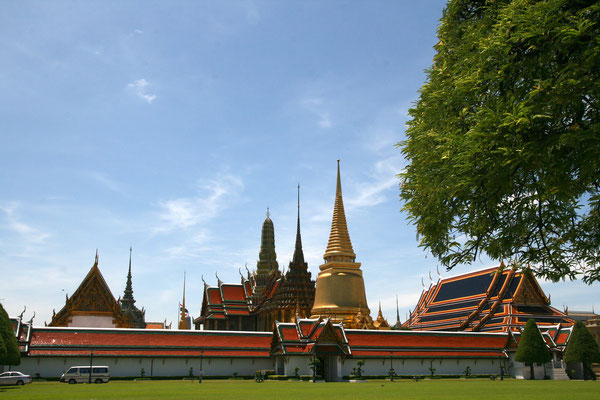 As tropical country straddling the equator, so it does not ever get really cold really cold in Thailand. The most pleasant time to visit is during the winter months, November to March, when it is cool with little rainfall. April and May get very hot and the rainy season runs from June to October.

The Thais roughly split the year in half. In April, Songkran, the water festival and the traditional Thai New Year heralds the imminent rainy season and the Loy Krathong Festival (festival of lights) in November is at the start of the dry season. The UV intensity and the daily sunshine duration are well above Central European values, even in the rainy season.

There are two airports in Bangkok, the newer, and main international airport, is Suvarnabhumi (BKK) which is one the most important aviation hubs in Asia, handling 45 million passengers a year. It is located east of the city and is very well connected by both road and rail.

The other airport is Don Mueang (DMK) and this is located north of the city center on the main arterial road to the north of the country. It celebrated its 100th birthday in 2014 and served as the country's main airport until 2006. It now handles most of the budget airlines and almost as many passengers as Suvarnabhumi.  Do make sure you check your ticket to see which airport you are flying from; a transfer from one airport to the other takes around 1- 2 hours, depending upon the time of day.connections, apart from small minibuses (Commutervan line 555).