Kanchanaburi will enchant you in many ways: whether you are a nature lover or more of a history buff, there is something for everyone. You will be impressed by the stunning scenery, can enjoy swimming in refreshing waterfalls and be fascinated following the traces of the historic 'Death Railway'.

The town of Kanchanaburi is located in the province of the same name in the west of Thailand, just 130 kilometers from Bangkok. You can easily get there in a couple of hours by bus, train or even a private transfer from Bangkok.

As interesting as the bridge and other historical sites may be, Kanchanaburi serves as just the spring board for so many activities and excursions into the mountains: trekking tours, cycling trips, kayaking, elephant sanctuaries and ethic hill-tribe villages.

Kanchanaburi is located in the cooler west of Thailand and so the cool season here is often cooler than elsewhere in the country and December and January can frequently see daytime temperatures below 25°C. Thanks too, to the Tenasserim Mountains on the border with Myanmar, rainfall is also moderated during the rainy season as the mountains protect it against the south-westerly monsoon winds.

So, Kanchanaburi is a great year-round destination, though be warned, like everywhere in Thailand, April and May can bring temperatures 40°C+ from time to time. Come in November to February when all the vegetation is still lush and green after the rainy season and is in full splendor, and the days are dry and sunny, but not too hot.

The Death Railway, the Bridge and the Museum

Of course, the Bridge Over the River Kwai is one of the main attractions in Kanchanaburi! But what is the actual story behind it? During the Second World War, the Japanese occupying army used tens of thousands of Thai, other Asian and Western prisoners of war to build the infamous railway line from Thailand to Burma. Living and working under appalling conditions, over 100,000 Asian and Western prisoners of war lost their lives, including during the construction of the Bridge Over the River Kwai. It was not called the "Death Railway" for nothing, one person died for every sleeper laid. Today you can take a ride on the railway and visit some of the memorials and museums around Kanchanaburi commemorating its building and the sacrifices made. 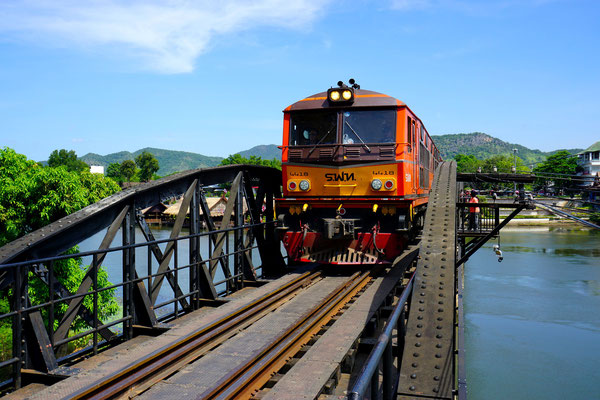 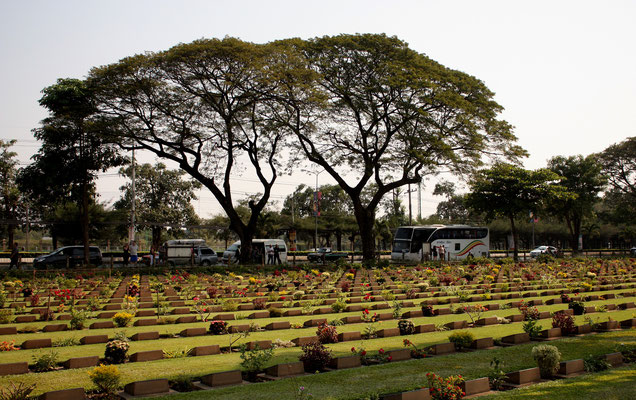 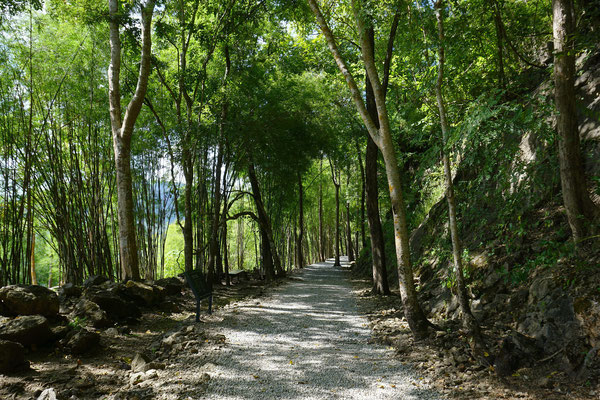 Another memorial of these dark times is Hellfire Pass in the Tenasserim Mountains. The approximately one-kilometer-long canyon had to be laboriously cut through the mountain with only the most rudimentary tools. The Hellfire Pass Museum is probably the best of the museums dedicated to this period of the war. Incidentally, the Death Railway still runs today - but only from Nong Pladuk Junction in Ratchaburi to Nam Tok in Saiyok, and if you take it you will, of course, also cross the famous bridge over the River Kwai.

A good night's sleep in Kanchanaburi?

Many visitors like to stay at one of the many rafthouses on the Kwai Yai River where you will be lulled to sleep by gently rocking of the rafts on the water and whether you want to spend the night in the city or prefer to stay further up the river, in Kanchanaburi there is the right accommodation to suit every taste and budget.

The Good Times Resort is beautifully situated on the River Kwai, just a few minutes from the city centre, with a delightful riverside terrace for dining and a stunning view of the river.

National parks in the Kanchanaburi area

If you are drawn to nature, there are two fine national parks quite close by: Sai Yok and Erawan. Sai Yok is about 100 kilometers from Kanchanaburi City and offers mountains, waterfalls and mysterious caves, and also the smallest living bat species in the world, and which is native only to this region. The 550 km² Erawan National Park became Thailand's 12th National Park in June 1975 and is known for its seven-tiered waterfall, which is supposed to remind you of the character of the same name from Hindu mythology, the three-headed elephant Erawan. The park also has some very interesting caves in Mount Khao Nom Nang.

Chaloem Rattanakosin National Park is the smallest park in the province, just 59 km². The park was named Thailand's 17th National Park in February 1980. The highest mountain in the park is Kam Paeng Mountain, which is 1,260 metres high. Despite its size,there are many species of animals in the park, including leopards, deer, white-handed and other monkeys. Over 60 species of birds have been recorded in the park, including Oriental Pied Hornbull, Francolin, Tickell’s Blue and Red Flycatcher and Coppersmith Barbets. A really unusual species found here is the water dog, or barking tree frog, a rare frog with a croak that is strikingly like the bark of a dog.

Sri Nakarin National Park is located in the districts of Sai Yok, Si Sawat and Thong Pha Phum. Beautiful natural features such as waterfalls, hot springs, caves and a reservoir dotted with islands make this park well worth visiting and spending an overnight at the park accommodation. The park was designated in 1981 and has a total area of 1,532 km². The source of the Kwai Yai River is located in the park. Wildlife is abundant including leopard cats, slow loris, civets, squirrels and bats and birds that are found include parakeets, kingfishers, beaters, orioles and barbets. 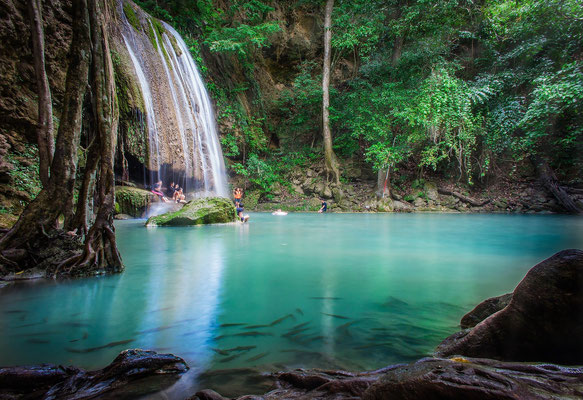 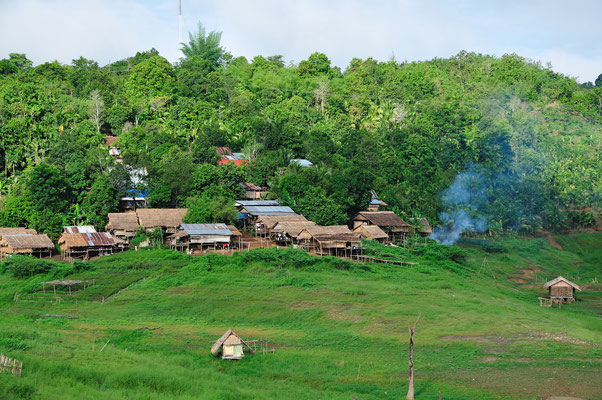 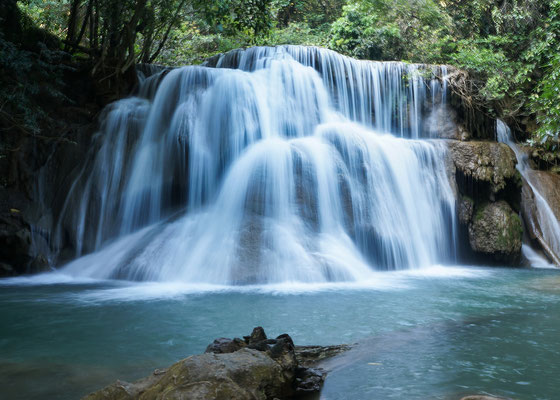